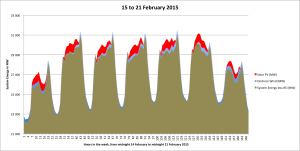 This graph has been made available by Karin Kritzinger – Centre for Renewable and Sustainable Energy Studies, and indicates how PV and Wind Power has been supporting the grid.

Red on the graph shows the addition of PV power from the various utility scale REIPPP programs and the blue shows when wind power resources start coming online. It may be of interest to note the times or periods when the different energy sources provide additional power.

It would be safe to say that this is evidence that SA is on the road-to-renewables. Although it may seem frustrating at times and it may feel as if government has been delaying the process to renewables, once it becomes clear that the current infrastructure has in its entirety not been designed as a grid that should be able to manage distributed generation; only then does the scope and size of the required changes in infrastructure, policy, standards and regulations start making sense.

Over the last two weeks, I have been privileged to get to know the potential dilemmas and associated risks in going 100%  renewable. Grid instability may sound like a term that is used loosely as a lame excuse not to implement the obvious renewable solution to alleviate the power crisis and although it may seem that municipalities are dragging their feet to implement long awaited policy while industry has continued to install systems deemed to be safe for operation regardless of the lack of clear guidelines and local standards. Rest assured; various standards are being created, adopted and amended to suit local conditions, some of the larger municipalities have started affecting changes to the local grid and metering capabilities in order to deal with the energy generated by renewables.

Whatever you do; as a guideline, don’t install a PV system that exceeds 25% of the rated municipal circuit breaker to a property where the property shares a transformer with other properties. The combined embedded generation for a region should not exceed 75% of the rated capacity of the transformer supplying those properties in the specific region.