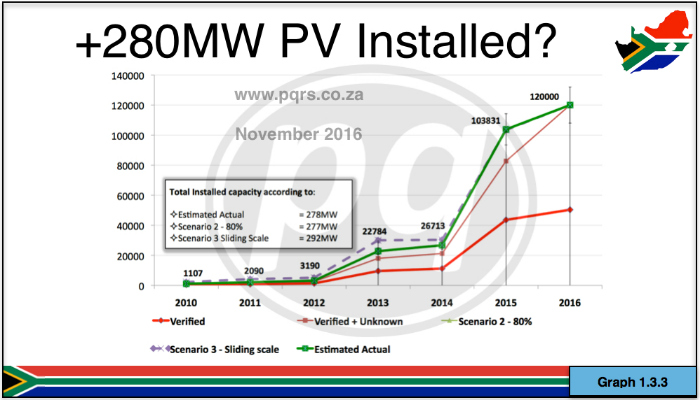 The aim of this report is to determine the actual installed capacity for Commercial and residential rooftop solar PV installations in SA. Different criteria were applied as a means of calculating varying outcomes and the varying outcomes were then compared in order to establish a level of plausibility. As a conclusion it needs to be established whether a factor can be applied to existing data in order to determine total installed capacity and industry growth for 2017.

Verify and Audit Dates
Verification of dates were completed over a period of 6 months and involved checking and re-checking dates of approximately 118MW’s worth of PV installations. We are confident that the dates currently reflecting in PQRS data is accurate and installation data is void of duplication. In the unlikely event where duplication does occur, it would be on smaller systems i.e. smaller than;10kWp and it is unlikely to have a significant impact on calculations / projections. 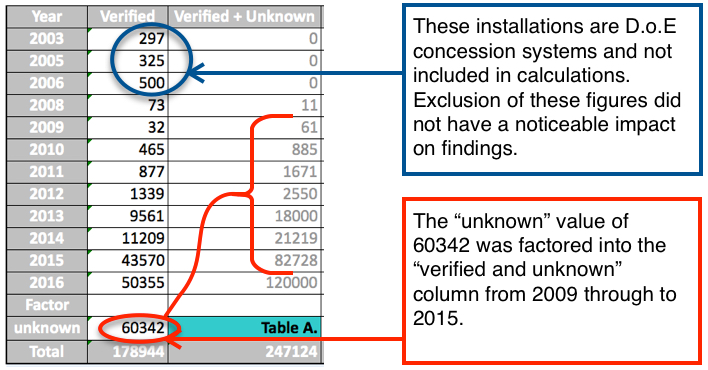 Determine the installed capacity
Installed capacity for 2016 was determined using information obtained from telephonic interviews with members of the industry combined with sales estimations and with selected data obtained from the PQRS database.
Total capacity for 2016 is indicated in “Diagram 10.2”. Data contained in that “Diagram 10.2” is an expression of estimated sales for solar PV modules in SA for the year 2016. The graph shows 140MW’s worth of sales of which approx. 20MW was exported to neighboring countries.
Due to rounding and possible exports to neighboring countries, a value of 120 000kWp is used in calculations as the installed / sold capacity for 2016 through PV module sales. It is estimated that 120MW which was derived from actual module sales could represent total local sales and installations for the period Jan – Dec 2016 and is reflected as such in the green cells in table A1. This report assumes modules sold, to be in the process of being installed or; to have been installed. Figures should be read against the accelerated margin of error as per our research methodology. The image was updated in Feb 2017. 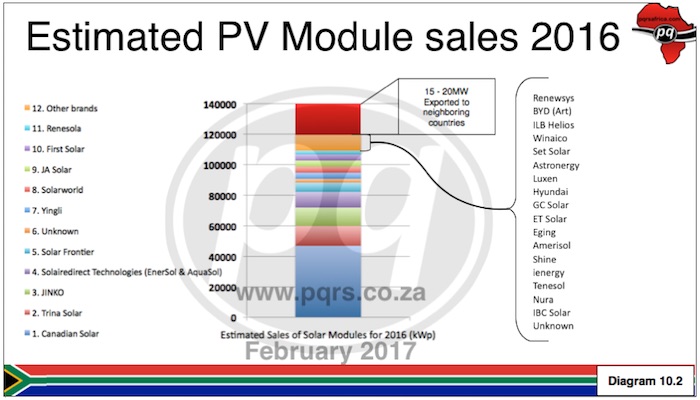 Calculate a factor
The PQRS total listed capacity for 2016 was used in order to calculate a factor of 2,38 meaning that 120 000kWp / 50355 = 2,38. The 120 000 value is derived from the actual sales from PV modules for 2016 and the 50355kWp value represent the total of listed systems of which the dates have been verified. 50355kWp (see table A) of audited installations represent approx. 40% of the estimated 120 000kWp of installed capacity for 2016.
Roughly 118MW of total installed capacity has been audited and; due to the volume of data is assumed to be representative of the growth of PV installations in SA over time. (see the section titled “Verify and Audit Dates”. This factor (2,38) was then applied to the installed listed capacity of previous years with the variation in annual installations applied linearly, i.e. each year the same factor was applied thereby concluding total installed capacity based on verified dates.

Apply the factor and; Compare certain assumptions
As referred to in Table A.1 columns 4, 5 and 6 three disparate scenarios are mentioned being Scenario 1, 2 and 3. Each scenario explores different arguments with Scenario 1 suggesting that the PQRS database consists of 50% of all systems installed. I.o.W. 50% of all installations done in SA is contained within the database in one form or another. Scenario 2 suggests that 80% of all installations done in SA is listed in the PQRS database in one form or another. For Scenario 3 a sliding scale was applied whereby it was assumed that the PQRS database consists of 10% less data per year starting at an 80% data penetration for 2015 down to 40% for 2010. Column 2 labeled “Verified”, reflects data listed at PQRS where the dates and installations have been checked and can be verified. Column 3 contains data that includes verified as well as unverified data and then it was assumed that the 120MW PV sales for 2016 had to form part of that particular column as well, for the purposes of this report and comparison. See also table A.

Comparison to previous articles.
During Feb 2016 a solar PV short report was published by PQRS which also made an attempt to calculate the total installed capacity. Although the calculation criteria used in the article considered other metrics the total installed capacity was was calculated to being 154MW at the time. If the value of 154MW according to the Feb 2016 article is taken and the 120MW sales for 2016 is added , the nett result is 174MW and still within the 270MW range. To our knowledge PQRS holds the only database of this kind for C and I and domestic rooftop PV installations in SA and hence no other studies / reports were used as a means of comparison or reference. 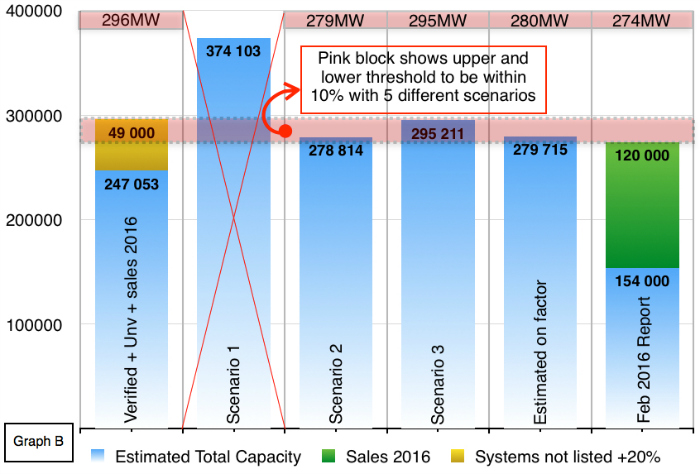 Conclusion:
It is possible to use the factor of 2,38 against PV systems currently listed with PQRS in order to determine total installed PV capacity by applying the factor against current data. The factor should provide realistic figures relative to growth based on existing grid conditions, i.e. stable grid.
Once those values have been determined, it should be possible to realistically estimate growth for the commercial and industrial as well as domestic environment for 2017.

For those involved in PV design and installations; we believe that 2017 will be a year of continued growth for the PV sector in South Africa and the rest of the continent.

These reports would not have been possible without the support from industry. A word of thanks to all that have submitted data.