This section of the report provides an overview of the solar PV sector in South Africa for 1-10kWp system sizes; and shows the estimated installed capacity by drawing conclusions using data from the PQRS data base. If the information and data contained in this report is of interest, please register to receive our newsletters as updated reports are circulated through new posts, social media and PQRS newsletters.

PQRS has been capturing solar PV related data since 2014 in an effort to determine the growth and development of the sector.

The question about where the data comes from and whether it can be trusted is regularly raised in conversations. Our research methodology have been made available on our website as a separate page.

The pyramid of data

Why a pyramid? There is a gradual increase in the number of installations as PV systems get smaller. Therefor it can be noted that the larger base of smaller systems at the bottom end and a small base or large systems at the top could symbolize a pyramid and is used in this report to present a visual model for installed capacity.

Certain assumptions have to be made in order to attempt “measuring” the number of installations that have been done in SA. The pyramid in diagram 1 below would therefor reflect all installations contained in the PQRS Database except for solar borehole pumps and government’s solar concession programs as these figures would affect the results of this report in a negative way. The reason for excluding these installations is that

The pyramid has been broken down into four sections each coloured differently with each colour  then also representing differently sized systems ranging from:  Orange – 1MW+, Green 100-999kWp, Blue 11-99kWp and Purple 1-10kWp systems. 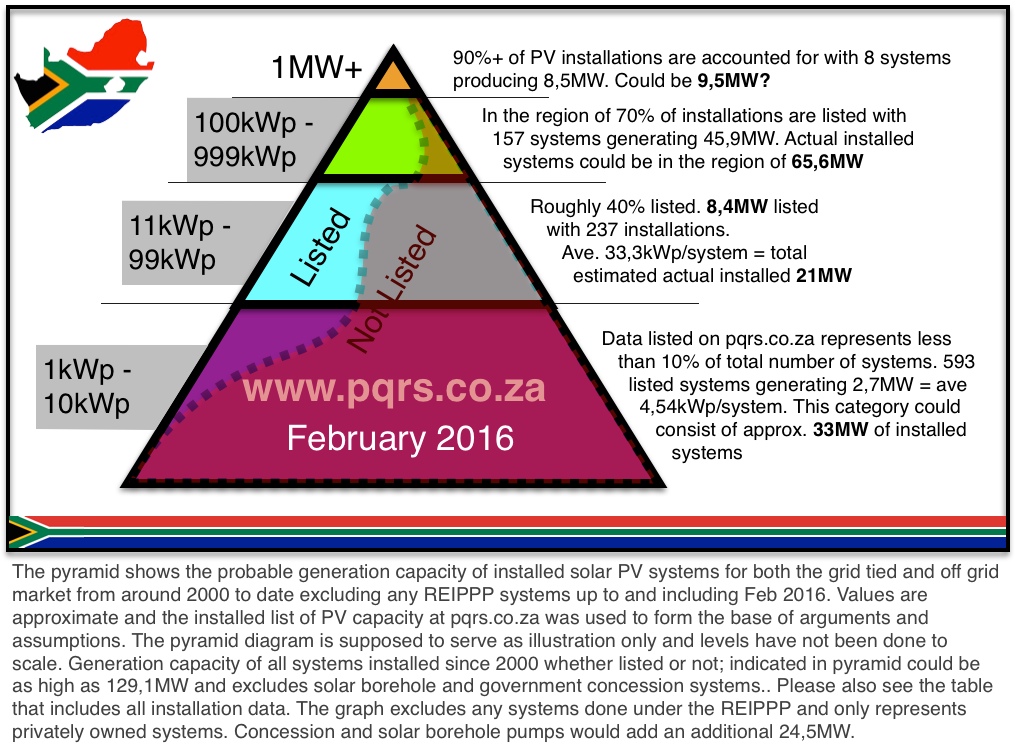 The 1-10kWp system data provided below does not differentiate between domestic and  commercial but rather looks at the statistical data that can be drawn from systems that have been listed with PQRS.

It can be seen that 593 systems have been listed generating 2,7MWp. Values that are not reflected in the data below, but which are known; is that one brand of 3kW Hybrid inverter sold 500 units during 2015, and another brand of 5kW bi-directional charger sold 1500 units during 2015. By adding the missing data and re-calculating the percentages of the systems installed, a more realistic value is derived to show the total number of installations in the specific 1-10kWp category. It might be important to note that the total number of installations in column 2 are shared among almost 70 different inverter brands.

Data calculations were done using a triangulated approach with: 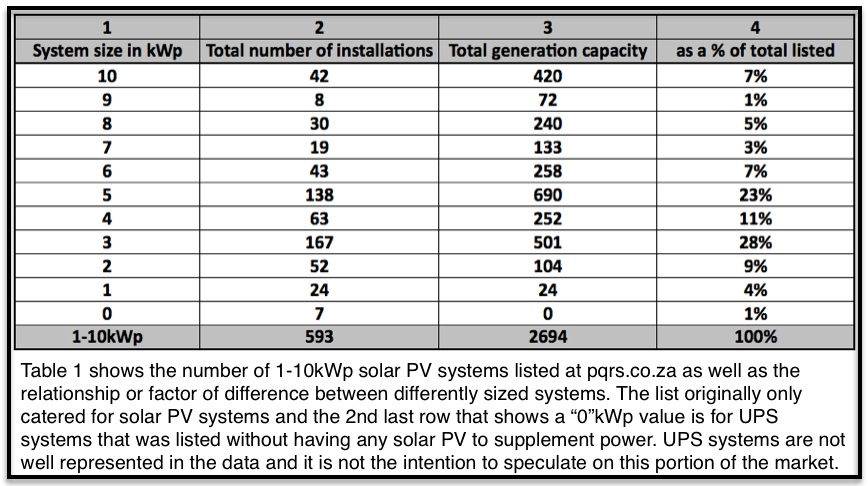 Although the table is only representative of individually listed systems, the actual list makes provision for bulk listings which have not been included in Table.1 above. The bulk listings would account for another 679 installations which need to be factored in as a percentage of each sized system as well as an additional 79 x 3kW systems and 320 x 1,5kW systems. Once all the values have been added and factored in, Table 2 paints a different picture.

Even though the installed capacity has increased substantially from 2,7MW to 15,5MW, the average of system sizes remain more or less the same at 4,5kWp for Table.1 and 4,2kWp per system for Table.2.

These values have now been compared or cross referenced in two different ways reaching more or less the same conclusions, i.e. 4,5kWp vs 4,2kWp per system relative to 593 vs. 3670 installations.

Generally the tendency seems to be for the majority of installers to start on smaller systems typically in the 1-10kWp range and then gradually increase the system size as awareness is created with existing clientele; of the newly acquired skill.

Training and development of the sector.

Once it is understood what the installed capacity could represent, other assumptions could be made that pave the way for identifying risks and opportunities to promote growth in the sector.

Through analysis the following can be concluded about the training sector.

Currently there are approximately 20+ institutions offering some form of solar PV training. Of the 20+ institutions or organisations only about 5 offer installer courses that are generic or product neutral courses which focus on solar PV principles opposed to product specific training.

Based on our figures approximately 70% of candidates that attend want to become or have the intention to become involved in solar PV installations. In the short term however only about 10% convert into sales. The reason for the small conversion rate could be the lack of access to the market. The rest are either engineers interested in the design and standards criteria, or entrepreneurs interested in identifying a new market into which an investment can be made in order to generate an additional or base income.

There are three types of contractors doing installations.

With the plus minus 20 training organisations, approx. 3000 candidates were trained during 2014 and another 3000 during 2015. That leaves 6000 candidates with around (10%) 600 that would end up doing installations as a source of income. This value may rise over time. For the purposes of this document we will assume the value to be 10%.

In the event where we assume 20% of electricians that do do installations do not attend training courses and 5% of the workforce are seasoned it leaves a total of 750 installers currently engaged in the solar PV industry through installation.

750 installers at roughly 44,44kWp per installer brings the figure very close to the 33MW that was estimated in the solar pyramid. 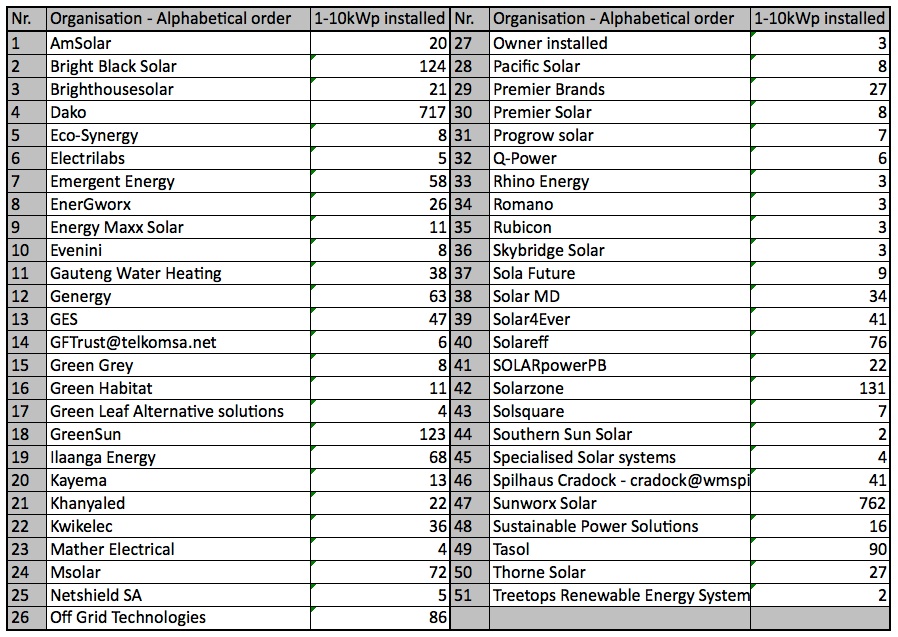 Table 3 shows all the installers / EPC’s / Contractors that have made contributions towards the installed capacity.

Please subscribe to our newsletter for the full report to be issued during the month of Feb 2016.