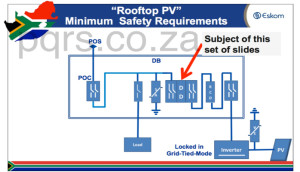 Contrary to popular belief, Eskom is excited about solar PV, they have a dedicated team doing research and developing solutions for grid tied PV installations in the low voltage electrical network environment.

Since the re-introduction of load shedding early in 2015, solar contractors and suppliers have experienced a significant growth in the demand for solar PV and backup energy solutions. Although hundreds of grid tied systems have already been installed, the lack of clear standards have left many electricians and contractors in the dark. This post was written in an effort to shed some light on what Eskom is doing and to add a few pointers of what could be considered during solar PV installations to ensure a safe installation.

Solar contractors expose themselves to risk by doing an installation in an environment where no clear standards have been provided. Once standards become available, contractors would technically have to go back and make the required changes in order for the system installation to comply to the newly established standard. As a result of our activities with the required departments at Eskom, we have the privilege of providing up to date information on what is being discussed and considered as solutions for grid tied installations on the LV network.

By providing this information, we would like to make it clear that although the proposed standards contained in this post have not yet been approved, it should provide guidelines on where the standards are heading and possibly contains information on what could be expected in the foreseeable future. PQRS would therefore accept no responsibility should the proposed standards in this post not be adopted. The following are being considered in future standards.

Although the contactors being positioned before the inverters could be seen as an amateur failsafe device; the reason for the contactors being there is to prevent the unit from re-energizing in the event of a power failure. Municipal or utility workers will therefor test the lines before maintenance and need to be assured that there wont be any systems that allow re-energizing for any reason or under any condition whatsoever.

This link will take you to the Powerpoint presentation that discusses the Disconnecting device currently being proposed for solar PV installations in grid-tied configuration in more detail.