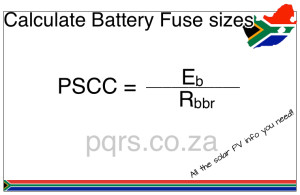 With the sudden increased demand in solar PV systems that would include some form of storage capacity, there are many new entrants coming into the renewable energy market, from a product supply side as well as a service & installation side.

Those contractors that have been installing solar systems with battery storage for many years would traditionally have a rule of thumb to determine fuse sizes. They know instinctively which size fuse to be placed with which battery bank based on the years of experience in working with the different products and types of installations. Possibly those contractors have even forgotten how the values are derived for calculating fuse sizes…… and then there are those that are new to the game who either under size cable thickness or in some cases even neglect to fit fuses and protection.

So in an effort to keep the posts short and practical, i will get straight to the point.

Fuse size calculation has two aspects to it. On the one hand the rupturing capacity of the fuse needs to be taken into consideration.

Rupturing capacity would provide a figure that allocates a kA rating to fuses and or circuit breakers. According to SANS 10142-1 the PSSC (or prospective short circuit current calculation) is a simple ohm’s law calculation where I=V/R.

The only difference is that according to the standard, the R represents the total resistance in the circuit. Resistance of the cable used could be measured or calculated. Opposed to using the standard ohm’s law formula, the formula reflected in the standard is the following:

EB is the open-circuit voltage of the batteries; if this information is not known, then use

RB is the internal resistance of the battery;

RBL is the resistance of the battery connections;

Ry is the resistance of the conductors.