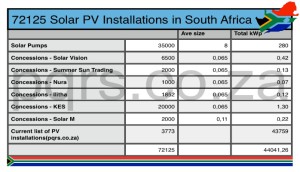 During the month of June; feedback from industry was the driving force behind a new perspective on the number of solar PV installations in South Africa covering both grid-tied and off-grid applications.

To date, we estimated that only a few thousand solar pv (grid & off grid combined) installations had been done. This perception was challenged with the figures provided during the month of June submitted by industry on some of the installations that have been done since as early as 1999. Sources quoted in the article as “SP”, “Solar M” & “SW” has not been listed as we have not obtained permission for their names to be displayed or information being made known at the time of publishing.

A Well-known pump supplier based in Kimberley (SW) indicated that they alone have sold more than 8000 solar water pumps since 2003. When the given value is taken and a value estimated for potential total national solar pump sales, the number of units sold and installed nationally could very well be in the 30 000 to 40 000 region. Lets assume 35 000 as the average to be used in calculations. Maintenance and replacement pumps did not form part of the assumptions.

SP (a company based in Pretoria) claims to have done in the region of 2500 solar PV installations of which most were off-grid since 2003. For the purposes of this document it was assumed that all were off-grid as exact or even approximate figures were not quoted or made available at the time of writing this article.

The list that can be seen at the solar pv installations list has had to be extended by another column to allow for rural electrification and to accommodate the way in which recent data had been submitted.

The graph below represents national installations in the 1-10kWp system range, where the total capacity of installations are considered for installers / contractors. 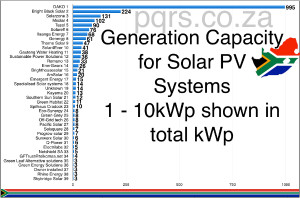 The list of companies actively submitting installations have grown to approx. 70 although our list of solar contractors represent more than double the number of installers opposed to those that have submitted installations.

Surprisingly the large number of installations that have been added to the list has not made a significant contribution to total installed PV capacity in kWp and has only raised the level to approx 44MW in installed capacity. In an effort to keep the names large enough to read. 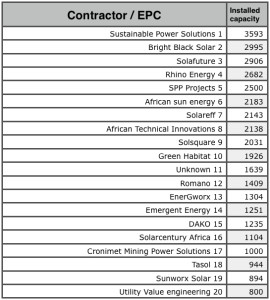