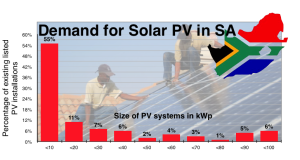 So before we start, where does the data come from and how do we even know that it could be accurate. Data used was taken from a list of PV systems that includes a little more than 253 installations generating just over 27MW’s worth of electricity. (The list can be seen by following the link provided at the end of this post). All listed systems only include privately owned systems and no utility scale projects have been included in the list.

The listed systems were categorized according to size in 10kW increments. Only systems of 100kW & smaller were used to create the graph shown above. This was done in order to see how many systems in each tier had been installed as we wanted to use the information to show where the local demand for PV was; based on existing installations.

Between 3 independent training centers a little over 1500 students were trained in solar PV technology during 2014. This raises the question as to exactly how many contractors are currently involved in doing solar PV installations.

What the graph indicates very clearly is that, volume of installations lies within the residential sector, however the bulk of generation capacity added to the grid would be through installations between 100kWp – 1000kWp. Naturally suppliers would have to make provision for a larger demand in Grid-tied inverters for systems smaller than 10kWp. In the next article we will be taking a look at the growth of installations projected over a period of time.

Solar PV list can be accessed or viewed by clicking here…..