The potential DC short circuit current released during a fault condition in a PV system is significantly different to the AC fault current that can be released during fault conditions in an AC circuit. This article will look at different standards and methods of installation of fuse protection on DC strings and arrays for solar PV systems. Included at the end of the article some associated international research documents, application notes, insights on general practice in South Africa with references and useful links.

(About the author: Carel Ballack has been following the growth and development of the sector   by creating a database of installed capacity. He also presents a 2 day (CPD approved) Practical solar PV course which has been attended by more than 1200 candidates over the last two years. Carel has a key interest in the PV sector from a standards, development and training point of view.)

Obviously there has been significant growth in research, technology and how various products are applied in solar PV  installations. During the last year alone we have seen significant  changes as well as differences in engineering designs for combiner boxes. It should be noted that some inverters have combiner boxes pre-fitted underneath the unit in which case the fuses would be supplied as per supplier recommendation.

The International Electrotechnical Commissions (IEC) recognise that protection of a PV system is different to a normal electrical installation. IEC 60269-6 defines specific characteristics that a fuse link is required to meet for protecting PV systems, i.e. class gPV. Although the standard does not recognise a specific symbol, the combination of symbols shown below for fuse links and strings are often used in PV systems and will therefor also be used in this article, see Figure 1.

The SABS (South African Bureau of Standards) have adopted IEC standards in the past and one such example is IEC 60325 which have been labelled SANS 60325. SANS 60325 is the standard governing/guiding SPD’s & Lightning Protection Systems. Even though it is not guaranteed that future standards related to solar PV will be adopted by SABS, we do need to draw references from disparate international standards in order to test its relevance under local conditions and against the installation regulations which are used to determine installation criteria for electrical networks locally. This method of borrowing international standards will have to pave the way for installations until such time as a local standard has been adopted.

Temperature has a large impact on how design calculations are dealt with in a PV system. Lets quickly take a look at the three components covered in this discussion; being modules, conductors and fuses. (By-pass and blocking diodes will not form part of this article.)

Modules are provided with temperature co-efficient values which can be found on the data sheets of the respective modules. These temperature co-efficient values indicate the impact of heat on the performance of modules for both thin-film & crystalline type modules. It should be noted that heat has a significant impact in the voltage of modules with current only marginally affected by temp. as can be seen in figure 2. The impact of heat on current will therefor not be discussed further in this article. 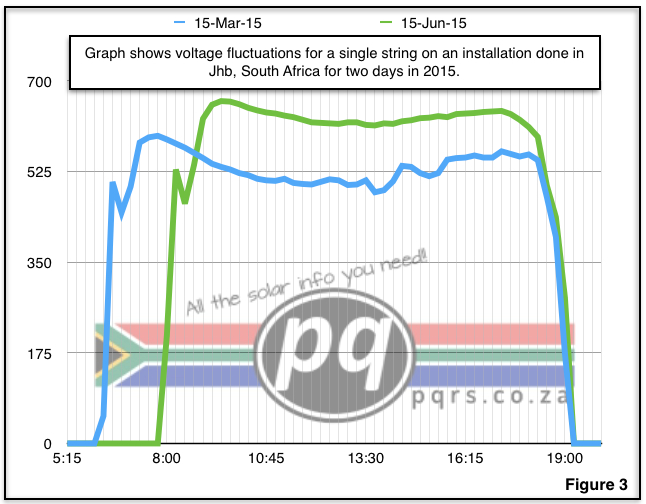 Fuses are required to be derated for the operating temperature. The derating chart used as an example in figure 4 makes reference to ambient temperature. It should be noted that the “ambient” value will be the actual temperature to which the fuses are exposed. In South Africa it could be expected for enclosures housing fuses to be significantly hotter than the environment. However in a fault finding exercise done by an engineering firm based in pretoria (the details of which can be made available on request) it was found that temperatures inside enclosures are typically only 8 to 10 degrees celcius warmer than the surroundings, even in direct sunlight. Although the fuse derating chart (figure 4) is rated to 80oC, it could be expected for enclosure internal temperature to reach a maximum of around 60oC in SA. 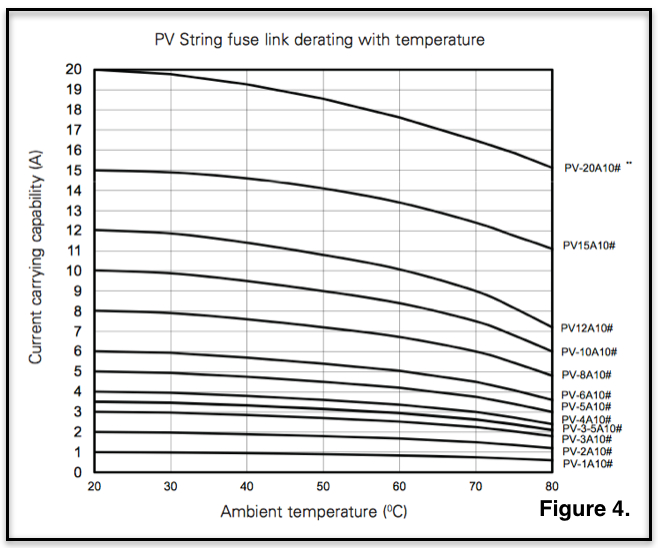 The higher the temperature of copper conductors, the higher the resistance in copper conductors. Volt drop according to the local installation regulations need to be lower than 5% from point to point. If the various international solar standards are scrutinized it can be said that 5% is way too high. In ABB’s installation manual all calculations are done around a 1% volt drop.

3% is however internationally accepted as good practice for solar PV installations. SANS 10142-1 provides a straight forward calculation for determining volt drop. An example calculation using the SANS formula might form part of a future article.

Cables have limitations with regards to the amount of current they can carry, this value has to be de-rated based on the environmental & installation conditions i.e, heat, whether it is a single cable, bundled, buried under ground, fitted on trunking, drawn in conduit, etc….

Solar cables should be the only cable used in solar applications, with the 4mm and 6mm being the most popular sizes used locally in domestic and small commercial applications. Solar cables up to 35mm2 are available locally for larger installations.

The following parameters are based on a specific brand of solar cable at 90oC with two conductors next to one another in an exposed type installation. It is imperative to obtain cable specs from the various suppliers / manufacturers in order to determine each projects’ unique requirements.

Locally a number of configurations and theories are applied in fuse selection criteria and combiner box design with the majority of combiner boxes being used in small commercial and residential installations only fusing the positive cable and some larger systems fusing both positive and negative.

It must be noted that fuses may be installed for the purpose of maintenance only, and may serve no other purpose in a single string application; as the fault current might not be sufficient in order for the fuse to clear a fault condition. In this application the motivation behind fitting fuses is to maintain a level of safety during maintenance procedures as contractors will be able to disconnect the strings (by opening the fuse holder) when the PV string has not been fitted within line of site of the inverter.

In solar applications; modules will continue producing power despite a fault condition. The determining factor for single string and two strings in parallel is to ensure that the cable will be able to maintain fault currents with a level of safety as the fuse wont clear the fault and the modules will continue feeding the fault regardless. In this event the integrity of the cable needs to be able to maintain said fault currents.

As a rule of thumb a factor of 1,56 can be used for current and 1,2 for voltage calculations in string configurations. The 1,56 values are in line with good practice in Australia, UK and the USA. This  research paper provides clarity on the various parameters in an easily readable format.

Based on recent research and developments, fuses should be regarded for both the positive and negative conductors in order to protect against fault conditions and reverse current. Despite the fact that fuses might be used in an installation, this does not guarantee the safety of the installation or associated equipment in cases where fuses are not sized correctly or fault conditions are not severe enough in order for fuses to open the circuit.

References used for this article: