The cost of aluminium has been rising steadily over the last couple of years making the decision to opt for a cheaper alternative easy when comparing the cost of mild steel as a method to support solar PV panels on rooftop and ground mount installations. Bimetallic reactions are hardly ever mentioned in conversations where supporting mechanisms are discussed. 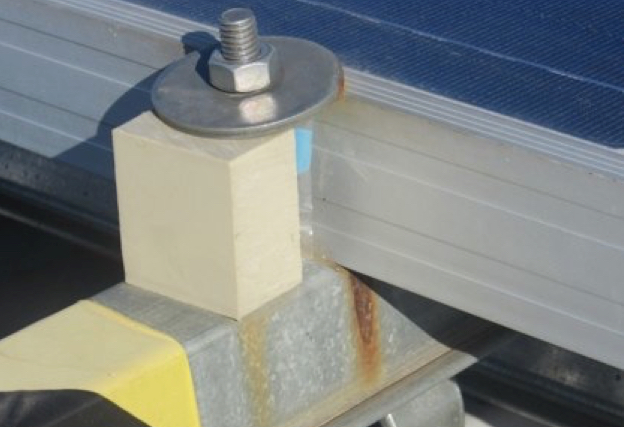 The photos provided above and below was taken at an installation that was installed approx. 8 months ago.

Systems being installed by EPC’s, contractors & project developers are supplied with the intention that the technology being supplied is supposed to last for +25 years. Although the design and integrity of the support mechanism should theoretically also last for the duration and life of the pv panels, it is unlikely that this would be the case where aluminium PV frames have been supported by galvanized mild steel support structures where no insulating materials separated the two types of metal. Only in a very small percentage of installations where mild steel support mechanisms have been used, did the installer take the time to isolate the two metals from one another with a thin piece of rubber or similar product.

If and when the standard is adopted, project developers may find themselves in the position where the older installations would have to be upgraded to the adopted standard. This could be enforced through the electrical C.o.C that electricians issue against an installation as the integrity and safety of the installation could be compromised.